Item is now in cart

« Back to News overview 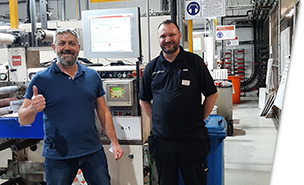 Rotolabel specialises in self-adhesive labels, mostly for the FMCG market segment, including wine. For almost 20 years the presses have produced labels for the South African market. However, a replacement of components is part of the life cycle of any press, and from a sustainability point of view, it makes perfectly good sense to exchange only some of the key components instead of building an entirely new press.

The initial phase of the project began during the challenging COVID-19 times. For that reason, much of the initial work and trouble-shooting were carried out at online meetings, and a complete overview of the project was laid out before the exchange began.

Erik Pedersen, Global Customer Care Manager at Nilpeter,
“With a press that has been in operation for almost 20 years, it is natural that the PC components will need to be exchanged at some point. If we don’t change the hardware, we would also face the challenge, that we can’t support the software platforms, they use anymore. Therefore, it was a necessary change if we wanted to add lives to the press“.

The existing main computer was replaced with a new powerful PC, B&R IPC910, i3 Dual-core processor. A new large PMC-monitor 15” upgraded to 19” touch screen monitor with SDL interface was also installed. The new hardware was updated with new software as well, Windows 10 IoT Enterprise. The replacement on both presses on-site took just over a week of work, as much of the configuration of the new components and software was done in Denmark prior to the installations on site.

The partnership with Nilpeter has been ongoing for many years and the upgrade went smoothly, Wicus Maritz, Managing Executive at Rotolabel says,
“We knew that it was time to change part of the hardware and we have had a very good dialogue with Nilpeter during the process. The upgrade itself went well and we are very pleased with the outcome. Our machines are much more stable, and the overall performance of our presses has increased significantly, as we have almost no downtime due to computer- and software-related issues and can run jobs much more effectively than before”.

Rotolabel and Nilpeter have been partners for many years, and the upgraded hardware secures the performance on the presses for the future.

About Rotolabel:
Rotolabel, South Africa, was founded in 1982 and specialises in the supply of world-class self-adhesive labels for many of South Africa’s most reputable FMCG producers. Their offering includes labels to the wine, pharmaceutical, personal care, and industrial segments.
Rotolabel was acquired by the Bidvest Group in 2008 and today forms part of the Bidvest Data, Print & Packaging division of Bidvest Branded Products. Bidvest Data, Print & Packaging is a leading supplier of printing, communications, packaging, and labeling solutions in southern Africa